This dream l had end of November 2015. I was shocked when l saw that, it was someone who goes to Church and the person was Zimbabwean because they were speaking in Shona. In Zimbabwe they are Churches that do not use the Bible, they use idols for example pebbles or water for worshipping and praying and they have their own prophets who tell them what to do and the prophets say it is God who communicates with them then they tell the people.

This is the first commandment: 1.Worship no god but me. 2. Do not make yourselves images of anything in heaven or on earth or in the water under the earth. Do not bow down to any idol or worship it, because l am the Lord your God and l do not tolerate rivals.

The person in the dream was in the Bottomless pit and she wanted to get out of there to free her soul from the people who took her to the pit. She came out of the pit and she was looking for a way to go out and start going up coming back to earth. The pit was protected by a very high fence, she did manage to look up so that she could start coming back that's when she heard someone who was guarding them at the pit looking for her and he was shouting to another person who was helping him to bring her back 'Where is she?(Aripi)Have you seen her?(Wamuona here?)She could hear them and she was just above trees trying to leave as fast as she can. In her hands she was holding two stones that had strings on them, one on the left and the other on the right, she was trying to swing those stones so that she can get out, and it was very difficult to even move an inch. The slings looked like these: 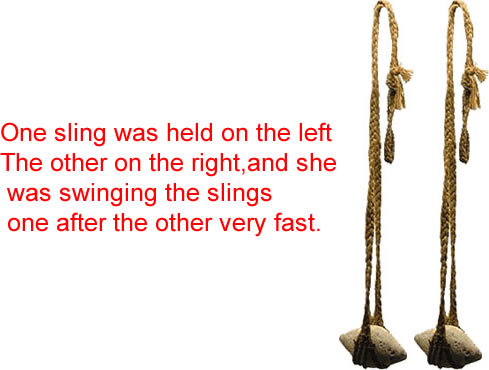 When she looked up she couldn't see anything it looked as though it was going to rain with very dark clouds.

Then one of the man shouted “I think she is above this tree” They reached her and she dropped down to the entrance of the pit. She cried and saw them coming to take her back. The Lord Jesus is the only one who can take you out of that place. You do not need pebbles or water or whichever idol you worship it will not work. Just call the name of Jesus within a fraction of a second you are out of the Bottomless Pit area. Ask the Lord to help you to get out because without Jesus you can't. He has the authority in Heaven, on Earth and the world below.

Anyone who tells you that you do not need the Bible they are lying, it is a lie from the pit of hell. The Bible is the Holy Book, how can you know the way without it. Jesus is in the Bible, all the miracles he did are in the Bible. How can you give reference to your Dreams and Visions if you do not use the Bible? How can you know his promises to those who endure for His Kingdom?

Mark 8:38 For whoever is ashamed of Me and My words in this adulterous and sinful generation, the Son of Man will also be ashamed of him when He comes in the glory of His Father with the holy angels.

Remember false prophets are among us and they are also supported by dark angels. They do not come to you as angels of darkness, in your dreams they are white so if you don't have the Spirit of the living God you won't know the difference. 2 Peter 2:1 But false prophets also arose among the people, just as there will also be false teachers among you, who will secretly introduce destructive heresies, even denying the Master who bought them, bringing swift destruction upon themselves. The woman actually thought she will manage to leave using pebbles, it does not work its an idol, and it doesn't matter which idol you worship, pebbles, water,animals, statues, bhuddha etc.